During the 2006 Commonwealth games held in Melbourne, Australia the Yarra River was decorated with fish from each of the Commonwealth Countries. Papua New Guinea was represented by the mighty Papuan Black Bass. 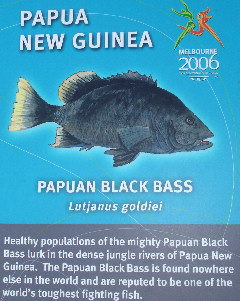 Papuan Black Bass are also called Papuan black snapper or Niugini bass. They inhabit brackish and fresh waters, they are opportunistic and omnivorous in their diet. They consume crabs, fish (including catfish, smaller bass, small crocodiles and mammals. In common with many large, riverine fish, Black Bass are territorial. In areas where there is little tidal influence they remain in the one general area, but where there are large tides they move with the tides and changing river flows and water levels.

In sportfishing circles it is generally considered that "pound for pound" they are the strongest fish swimming in either fresh or salt water. -- Wikipedia - Bass