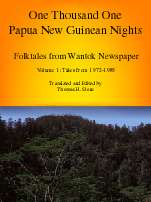 Long ago, in the time of the ancestors, there was an old man. His name was Wanabokobombom. This man lived in a village named Genana [Milne Bay Province]. One day, the man paddled and paddled his canoe. He asked two boys to paddle it to a village named Wedau [Wedau People].

The two boys told their grandfather to wait, that they wanted to get their food ready. However their grandfather said, "Grandsons, never mind that. I've prepared everything. I have food, green coconuts for drinking, sugarcanes, betel nuts and peppers, and everything else. Just jump in the canoe and we'll go."

The two poor boys just jumped in and they paddled away. The sea was not too choppy, so they lay on the water easily, and the two boys paddled seawards. The little brother was thirsty so he asked their grandfather, "Grandpa, can you give me some coconut milk?"

His grandfather told him, "Sorry, you two did not get your food ready when you came." The poor boys just sat quietly. Their grandfather did not give them food.

The two of them were hungry now, but they kept paddling and arrived at Wedau Island. They stayed on this island for one week. During this week, their kin on Wedau Island killed pigs and gave them to the two boys. Their grandfather went to eat the food that they had given to him.

Another day, they went back to their village. When they were going back in the middle of the sea, a heavy rain fell and drenched them. When the sun came out, it baked them. Then their grandfather felt very thirsty.

He asked the young boys, "Grandsons, can you give me a green coconut to drink?" The little boy said, "Sorry grandpa, you can't. Think of when we went to Wedau and I asked you for a drink from a green coconut. What did you reply? So now, we can't give coconut milk or food to you either."

Their poor old grandfather was dying of thirst. The other grandparents of these two young boys lived on a mountain named Mount Ganuvinoa. A woman was angry with the boys' old grandfather. The woman took a stone, blocked the water and the water no longer came from the top of the mountain. The water gathered where it was blocked and became a pond.

When the three of them went to their village, their old grandfather did not think of his grandchildren. He ran to drink water and found that the water was dry.

This stream had two sources. He followed the two sources of the stream together and went up the mountain. He thought that if one stream were completely dry, then the other would have still have some water. He went far up and tired then just followed one branch. He left the stream named Dodonaia and followed the Oua Stream.

At this time, the two boys were eating fruit from a tree that belonged to the old woman. When the woman went to the garden to work, she cut her leg. Because of this, she knew that some clansman was probably stealing something of hers.

The woman called all of the things that belonged to her, but she did not call the things that were stolen from her, so the blood was still falling from her. Later, she thought of the tree that the boys were eating from and said, "I think they're eating from my tree." The name of this tree in my language is makita.

This tree looks like a pandanus (karuka) and grows by the beach. When the woman called the name of this tree, her bleeding stopped. She went and tried all of her "grass" skirts, but each of the skirts that she tried on was very heavy, so she took banana leaves and affixed them like a skirt, then went directly down to the beach.

As she ran, she flew like the wind. She came to the beach and saw the two boys who were eating the tree fruits. The woman called out to them. She said, "Ah ha, you are eating from my tree, huh?"

They called out, "Oh, grandma, it would be bad if you ate or killed us." The woman said, "No, I'm not a murderess, but you two come down here." The two boys went down from the tree.

The woman took them and they went up a mountain to her home. They lived there happily together. So now at this time, this woman still lives on top of our mountain. This woman is our ancestor. She lives in a cave. Now we try to follow this custom: we often paddle our canoes to Wedau to see our kin there, and they often make food and kill pigs for us. And the water too, when it is rainy and it floods, you cannot cross and go to the other side. When the sun is strong, and the water dries up, go up the mountain.

That is the end. This story comes from my village, Ibonaniu [Ibwananio] in West Fergusson Island, in Milne Bay Province [Kukuya People]. This was the story of the two boys whose parents died and who were all alone. The grandfather was Wanabokabombom [Wanabokobombom] and the grandmother was Iapapyaya [Ipapaya]. This is a true story that is still told.