The 2009 PNG National Games were held in Port Moresby during November. Competitors came from all around the country. (20th - 28th of November) 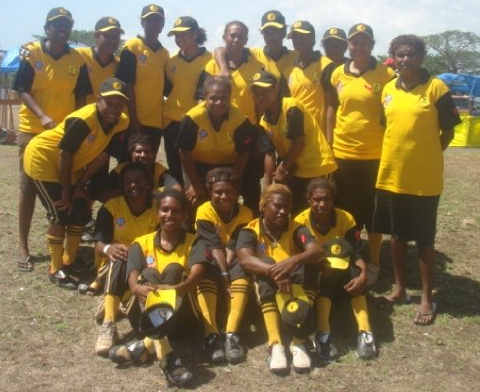 Some of the Softball competitors (photo thanks to Lisa Polum)

Here is a description of the Games by Lisa

The PNG Games are a bi-annual event that is basically held at the grassroots level as a tool for talent identification for various sporting codes, of which softball is one.

This year the Games were held in Port Moresby, National Capital District, and were the biggest thus far, having over 7000 players and technical officials. I think they even said it had a bigger contingent then the SP Games in 1991.

The ladies in the photo are part of the NCD Womens team and shows 17 players, 2 Coaches (one of which is Lisa) and a manageress. This team comprised of our up and coming talent as Softball in Port Moresby had not gone out to the suburban areas as at that stage. This was the first time the NCD Womens team particiapted at the PNG Games. Lisa's development squad did exceptionally well, they had an unbeaten track record during this Games and eventually won gold, beating Morobe who were the reigning champions.

Thanks for that Lisa, your "liklik" report is very much appreciated.