BSP, the Nation’s largest Bank, launched the highly successful BSP PNG Regional Community Programme with Tennis for Schools back in May 2009, a sponsorship package worth over K150,000 per year with the Papua New Guinea Tennis Association. The sponsorship runs for a 3 year period through to the end of 2011. 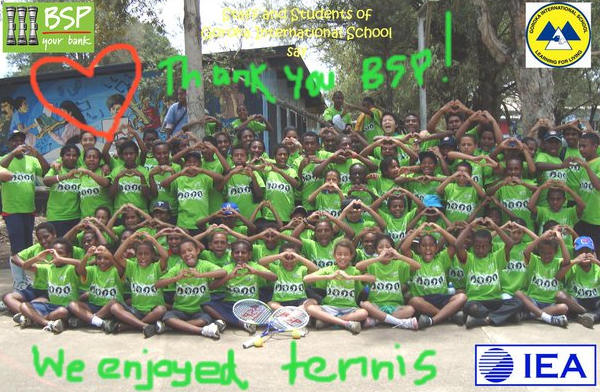 The children from IEA Goroka

The Tennis for Schools Programme commenced in Daru in May 2009 and has travelled all over regional Papua New Guinea since then. Well-known PNG Tennis Association Development Officers, Michael Foo and Lavu Ivuyo have provided the sponsorship programme with their tennis expertise giving thousands of young, enthusiastic school children and many of their equally keen teachers, training in the basics of tennis, as a healthy and invigorating outdoor sport. At times they have been assisted by another well-know PNG tennis personality, Senior Coach, Kwalum Apisah. 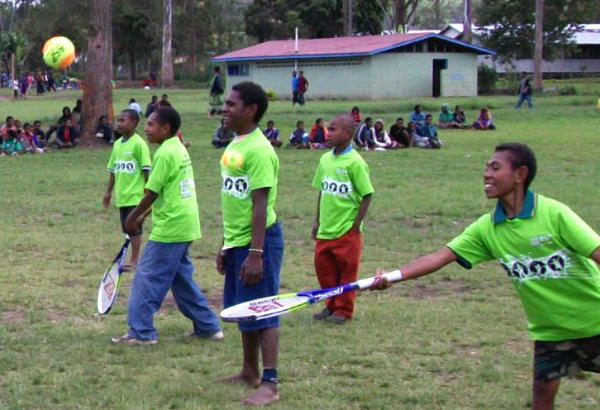 Hitting the tennis ball in Kainantu

The original concept was fully endorsed by Mr. Ian Clyne, BSP’s CEO, who said that BSP is delighted to be associated with the PNG Tennis Association in this important Regional Programme. Being able to take tennis to many of our schools around the country and provide thousands of young school children with training to give them the basic skills in tennis is a most rewarding experience for all those involved.

BSP’s Manager, Public Relations & Communications, Rosemary Mawe, said that the Tennis for Schools Programme has far exceeded BSP’s expectations. Overwhelming support from School Headmasters, teachers and each of the local BSP Branch Managers and their staff has greatly contributed to the Tennis Programme’s success. It is noteworthy that quite a number of the schools provided traditional welcoming ceremonies to the BSP / PNGTA teams on their arrival. This also shows the high regard that schools have for such a programme. 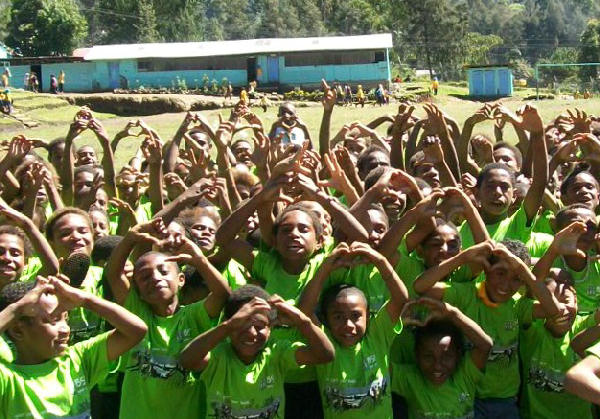 In many instances Head Masters have said that sponsorship activities don’t normally reach out to the smaller communities in the outlying regional areas, but BSP has focused on ensuring these smaller locations are fully included. Rosemary Mawe said it’s BSP’s way of putting something positive back into the local communities. 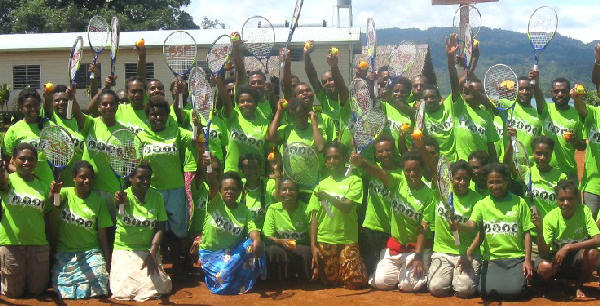 Being involved in such activities has also encouraged a stronger team spirit at each of BSP’s Branches. By getting involved with their local schools through the BSP Tennis Programme this has built a closer relationship within each community. BSP’s Branch Managers have proven that the hands-on approach to such sponsorships is beneficial to both the bank and the local communities.

Some of the students from Lae Market, Morobe province

The BSP Tennis Programme has now concluded for this year. It has continued to be highly successful and a programme that helps to develop new skills for our young people as they progress through their schooling activities. At many locations where the tennis programme has been conducted, teachers and parents have gathered together to form Tennis Associations that will ensure tennis is an on-going sport in their local communities. Most of the schools have now also included tennis as part of their sporting activities.

This further reinforces BSPs commitment to continuation of the sponsorship in the year ahead. BSP’s Marketing Department is already attending to sourcing adequate supplies of their very popular and colourful BSP T-Shirts, tennis racquets, tennis balls, nets and other requirements essential to the programme’s on-going success. At BSP we all look forward to a very positive year ahead as we will take the BSP PNG Regional Community Programme even further around the Provinces during 2011.

BSP. Your Sport. Your Bank.

Thanks to BSP for the press release..