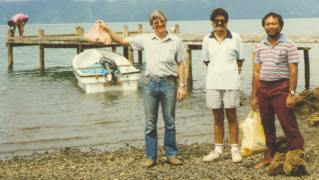 Our trip began with our journey from our individual homes in Port Moresby to the legendary World War II airstrip at Jackson's. (Seven Mile) We caught the Air Niugini Dash 7 aircraft from Port Moresby to the Milne Bay provincial Airport at Gurney. Gurney is named in honour of Charles Raymond (Bob) Gurney who, as an early aviator, started flying for Guinea Airways in 1929. He was killed in action in 1942 whilst flying for the Royal Australian Airforce so we went from one World War II airstrip to another. Arriving at Gurney Airport we were lucky enough to be able to hitch the 15-kilometre ride in to the provincial capital of Alotau. The town is located on the edge of Milne Bay. The bay is 36 kilometres long and 16 kilometres wide. We walked from the drop-off point to where I thought the boat would be leaving from. Our fearless boat operator, Chrysostom Maibani, had brought the boat to a pier a little bit closer to save us the trouble of walking. Unfortunately our drop-off was past the pier but in a matter of minutes a panting Chrys had caught up to us having seen us go by in the 3 tonne truck. 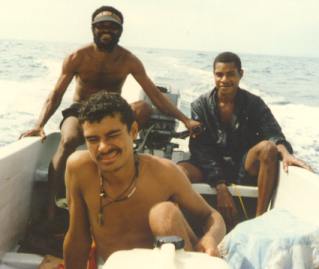 Our back up outboard motor boat crew

After the introductions to the crewmembers we headed off, for what seemed like hours of pounding against the waves, in the speedboat. I had to sympathise with the support crew who had travelled all the way from Wamira that morning and would have been pounded for far longer than what we had. The scenery from the boat was magnificent the sun was shining and we couldn't have wished for a better day to start our walk. 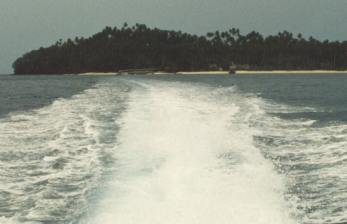 The view from the back of the boat

Eventually, after passing between islands and motoring past many villages such as Ahioma, we landed at Garuahi and started our walk, but not before the third member of our trip, Joe Chan, twisted his ankle hopping out of the boat. Thank goodness the boat was to follow us for the rest of our scheduled three-day walk.

Joe - in the boat relaxing