The Walk to Wamira Starts

The walk started and we moved along at such a brisk pace that there was hardly time to take photographs, but we sure did have an abundance of time to admire the scenery. We were greeted by cheerful "hellos" as we walked past each and every village.

Some of the rivers had crude bridges made from whatever was locally available, such as a fallen coconut, but one of the most enjoyable segments of the walk was being able to wade or swim across rivers. 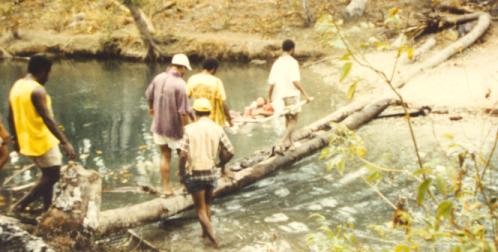 After pounding the soles of your feet onto a rough bush track for several hours I found that a quick paddle in a river was actually a refreshing break rather than just a necessary chore to get from one side to the other. 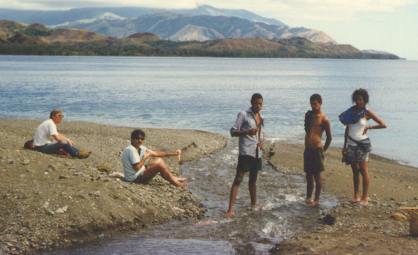 A small creek to bathe those feet!

The hours rolled by so fast that it was soon time to rest for the night. About a half-hour or so before sunset we decided to call it a night. 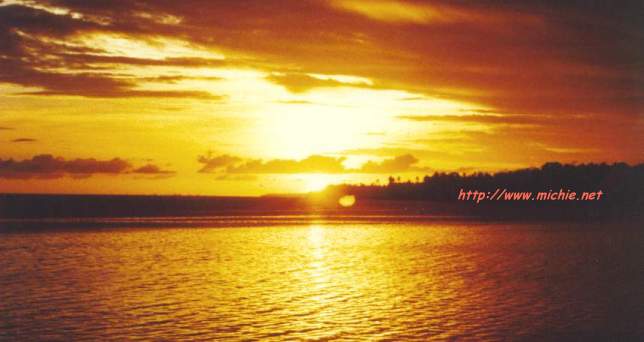 This is where we made our only minor mistake for the trip. Because Papua New Guinea is in the tropics we simply set up camp on the beach without tents or covers. By the time we had our campfire going we were overwhelmed by extremely hospitable villagers who appeared from anywhere and everywhere. It would appear that the bush telegraph is alive and well in Milne Bay. Some of the villagers had brought boiled water in kettles for hot drinks. Others had cooked fish and vegetables for us whilst small children brought freshly picked coconuts for us to drink. We couldn't refuse the children so we paid them for their kind thoughts. If you've ever watched a youngster climbing a coconut tree you'll understand why we felt it was necessary to pay them for their hard work. Of course this created a minor problem! We had all packed camping goodies, which if we didn't have a boat following us, would have been a major problem. Instead of getting lighter our packs were staying the same which meant it felt as if they were getting heavier. 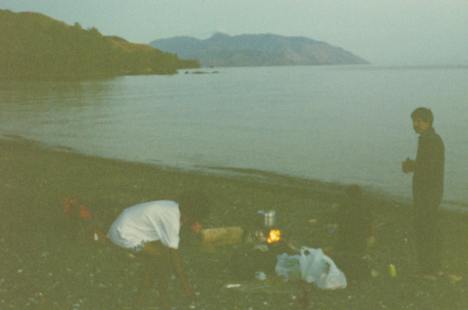 Our first camp just on dusk - near the village of Taupota

After a wonderful night under the stars we arose to a breakfast of tinned goods to lighten our packs. After all this was supposed to be a serious walk and we couldn't have the boat carrying all our excess food now could we. On the second day Joe was able to hobble along for a small section of the walk every now and again so of course we had someone to pick on and make fun of.

This night we made sure that we camped well away from any villages. Those Milne Bay people are just so friendly and helpful. Most of them probably earn less per year than the average working Australian earns in an hour yet the offer of free food and drinks as we went along taught me a great deal about what material wealth is all about.