I have done a fair bit of flying in PNG and can testify that there are some pretty exciting airstrips around the country. Even some of the main ports can prove to be exciting in abnormal conditions. PNG relies very heavily on air transport probably more so than any other country in the world and the rapidly changing tropical weather patterns make for a very challenging environment for flying.

The majority of flying in PNG is conducted under visual flight rules (VFR). The mainland of the country consists of numerous very high mountain ranges rising up to 14,800 ft (4,500 metres). Often to get from point "A" to point "B" in PNG means flying in small un-pressurized aircraft, making it difficult to fly above these mountains and the towering clouds. Many times a pilot can not see where the mountains are and so it is impossible to fly over them when you can't go into cloud. The weather changes very quickly in PNG so when a pilot calls up for weather information before a flight he knows to use it as a guide only.

Navigational Aids are often vandalised and even if working are only available at the larger airports serviced by the National Carrier - Air Niugini. Most navigation is done visually or if the aircraft is equipped with a GPS equipment that can also be used. Port Moresby Jackson's Airport is equipped with an Instrument Landing System (ILS).

Even though some people say that PNG is the ultimate challenge for pilots what with short, rough runways some with dog-leg approaches and often unusual payloads I recommended taking a flight around PNG. The pilot will keep in touch with the various airports using Single Side Band High Frequency (SSB HF) radios throughout the flight. Often there is no other form of communication so the SSB HF must be kept in tip top condition and backed up by good quality batteries charged by Solar Panels.

For your information the flight from Ononge (ONB) to Woitape is claimed to be one of the the world's shortest scheduled air trips - a total of five (5) minutes between the two airstrips. Ononge is certainly the world's scariest landing as the ridge top strip has a dogleg and the pilot has to make a ten-degree turn halfway down the airstrip. However, Fane and Tapini are arch-rival white-knuckle strips guaranteed to take your breath away as you take off over a cliff, just like taking off from an aircraft carrier.

Ononge airstrip is 1792 metres above sea level in the rugged Goilala area of PNG's Central Province and is only about eight kilometres from Woitape. www.maplandia.com/papua-new-guinea/central/ononge/ 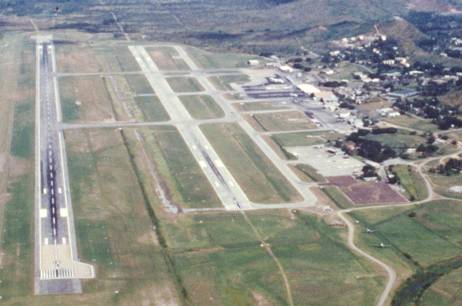